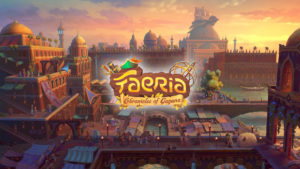 BALTIMORE,MD – April 17th 2019. Indie Publisher Versus Evil and Indie developer Abrakam are pleased to announce that digital collectible card and turn-based strategy game Faeria released its latest expansion, ‘Chronicles of Gagana’ and is available and priced at $13.99 / £11.99/ €12.99 with a 10% discount for launch week.

The expansion adds a new civilization and continent, new creatures never seen before, and allows players to discover powerful ancient treasures. The ‘Chronicles of Gagana’ expansion provides players with 40 new cards to help build out powerful decks to plan new card synergies with. The expansion also adds a new Mecha card subtype, for the first time in Faeria, players will be able to enter the very heart of the Mecha civilization, a city built into the core of a volcano!

Faeria is a unique digital collectible card and turn-based strategy game that takes place on a dynamic living playing board set in a fantasy universe, players can build out their decks, shape the battlefield and fight epic battles.

Chronicles of Gagana is the third expansion pack available for Faeria and follows Resurgence and Fall of Everlife, both of which have added considerable content to the game.

Faeria will be coming to consoles this summer.

Chronicles of Gagana – what’s inside?