Last week we launched Patch 2.55.09 for Pillars of Eternity on Switch. This initial patch resolved a lot of the larger more common bugs players were experiencing, such as Ranged attacks not working, Item properties not applying, and Scrambled combat logs.

Of course, there’s still more to be done. Our team is hard at work on the next patch and we hope to have an estimate on when that will be live soon so keep an eye on this blog, our Facebook, or our Twitter. In the meantime, I wanted to take this opportunity to give you all an update on the status of some of the current known issues, and perhaps answer some of the questions we’ve received from the community recently.

Grey Screen: We are doing multiple things here to track down the root cause of this issue and get this one put to bed. We’ve contacted several groups to get further assistance and we’ve continued to narrow down things that we have deemed not responsible for this issue.  We know this is a huge headache for y’all but we’re working around the clock trying to get this one knocked out.

Abilities Not Working: Some abilities, including Knock Down and Blinding Strike, are not currently working as intended. We’ve got the cause sorted and we’re working on a fix for this issue. 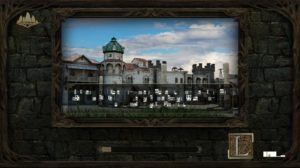 Scrambled Text: The first patch did include a hotfix for the scrambled combat log, but we are still working on a permanent fix for all scrambled text bugs. While related, the combat log text bug is separate from what you see in the screenshot above. We are working toward a fix for this now.

Game Crashes: The first patch improved overall game stability which should significantly decrease the number of crashes players experience. However, a small number of people are reporting more frequent crashes when entering new areas after the patch. Our team is investigating these reports and believe it may be tied to the grey screen bug. We will keep you updated on our progress.  We currently have some memory optimization updates in test that should also help with the overall performance in both docked and undocked modes. 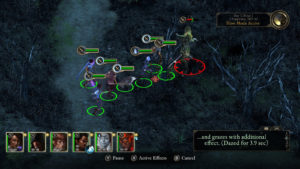 Camera Zoom:  We’ve had several questions about the camera zoom in the Switch version of the game, specifically that you cannot zoom out as far as you can on PC and other console versions. This is correct, and is not a bug, rather an optimization feature for the Switch that was created by design. However, we did notice that the selected zoom did not remain when transitioning to a new area and was resolved in the first patch.

AI Pathfinding: We are aware that in some cases AI pathfinding glitches and characters become stuck or stacked on each other. This is likely a result of optimizations made for the Switch version, and the team is investigating ways to improve it.

We are committed to working hard to bring you the best version of this game possible on Switch, and we will continue to make improvements until we get there. Thank you for your feedback, constructive criticism, and patience as we continue to update you with our progress. We do encourage you to continue reporting issues that you see as that helps us tremendously. To stay up to date on all the latest news, make sure to join our Discord and follow us on Twitter and Facebook.

Cardpocalypse Out Now on Apple Arcade and the Epic Games store. Save 20% for Launch Week!

Cardpocalypse Out Now on Apple Arcade and the Epic Games store. Save 20% for Launch Week!