By MaevriDecember 2, 2020 Versus The Week
Wishlist Almighty on Steam

We’re back again with the Almighty Monthly Update from RUNWILD. Read on to find out more about what the developer has been focused on this month and what you can expect from them in the near future!

We have been putting a lot of focus on player onboarding and first-time experience, in addition to the features we are adding. Almighty has a lot of aspects to it that can be a bit overwhelming when presented at the same time. We have been working on a short tutorial section at the start of the game that takes place in an Ethereal Plane where the player is shown the basic controls. It features stones coming out of the clouds for the player to run across. 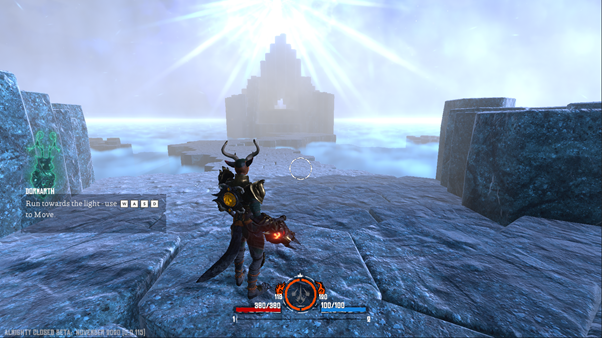 We want Almighty to allow the player to explore and experiment, we didn’t want to drag players through by the nose. The initial idea was to have no tutorials but it became clear that some players needed them, at least to cover the basics, which we now do before throwing the player into the action.

Something we have finally added is the progress menu, this details the different aspects that show how the player is progressing through the game, in addition to the HUD. First up is the XP bar, traditional in that the player earns XP to level up. Each level the player goes up they earn gold and Soul Gems. It is the Tiers that are the key stages though as this allows the players to use higher tier items, unlock new islands to explore and get access to better loot. Currently it takes 20 levels to go up a tier, but we are looking at this and may change how the tiers are distributed, but the principal will remain the same regardless of number distribution. 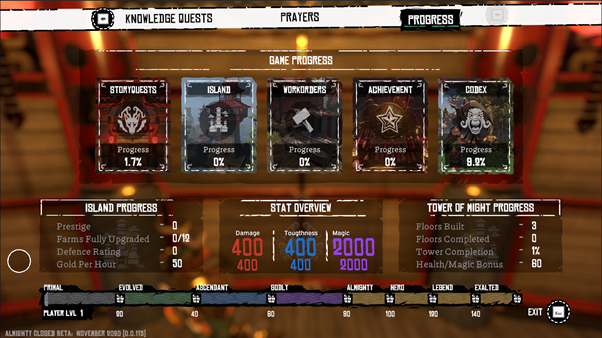 Gear is a separate aspect to the players level and is represented in the Stat Overview. Players will have to swap out and improve their gear set as they progress, which they can find in loot drops or craft using blueprints. Gear levels are represented by Damage, Toughness and Magic stats that calculate all the gear settings and puts them into 3 numbers that can be compared and referenced. There are multiple gear slots so players can create and swap different builds, so this will change depending on what is equipped.

Tower of Might will feed into the stats by increasing the players Health and Magic Power, the bigger and more impressive they make it the more these stats increase. This is detailed on the progress menu showing the number of floors and how upgraded each floor is. 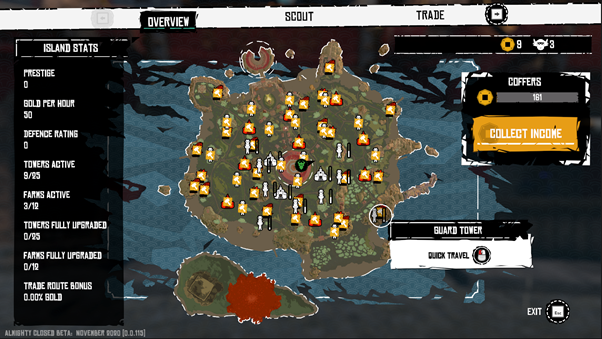 There is an overall Home Island stat that includes everything that can be upgraded on the home Island, like the Citadel, Tower of Might, Farms, Guard Towers, Mines, Wells, Statues, Banners. Upgrading the Citadel will involve completing work orders which is also another stat that is tracked on this menu. The Home Island can generally be managed from the Island Stall, where the overview as shown above will show the state of repair of all the significant buildings on the Island, as well as providing other functionality. 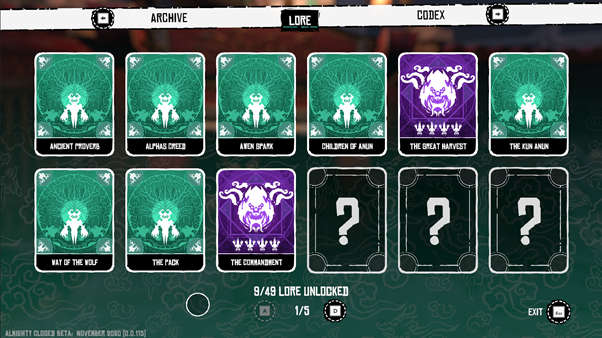 Story Quests on the Progress menu, which we will likely rename to Knowledge, are the Knowledge Quests that the player can select from the Prayer Wall that unlock a piece of Lore when completed. The majority of these quests are in the public event style, you activate the quest at the Prayer Wall and then go to the Island it is located on and activate the event. Other players can join in and help if they are about or players can do it solo. Groups of these quests are unlocked as the player goes up in tiers, and can be done in any order, and currently consist or Nemeton Tree and God Relay events.

Codex you get by encountering things when exploring that will give you more detailed info about how they function and Achievements are for mastery of certain things. We are still adding some detail to these.

So the aim with these different aspects to progression was to try and give the player some freedom of how they went about things in a non linear kind of way. They could focus just on their character, levelling up and getting better gear, and come back later to upgrading their Island or take the opposite approach and anywhere between, play through the quests when available or not touch them at all and focus on head hunting.

We are hoping that this will allow players to have different experiences, even though they will still be killing the same enemies and exploring the same islands, how they approach things could be personal to them.

That’s all for this week! Hopefully you are all enjoying your holidays so far, and I’ll see you again in our next update.

As always, if you have any content or questions please feel free to reach out via our socials. You can stay in touch with me and the team by joining our Discord and following us on Twitter, Reddit, and Facebook. 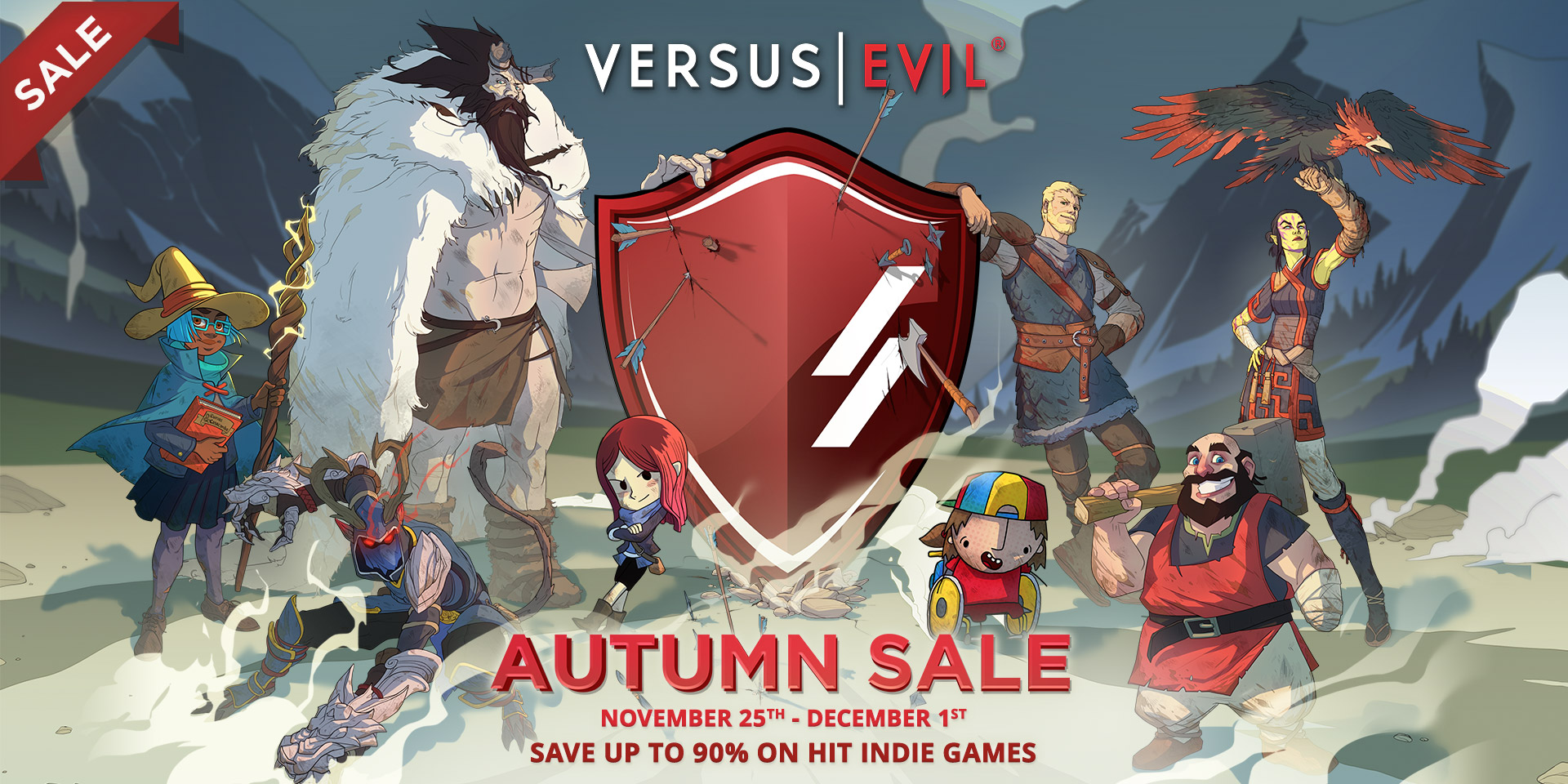 Welcome to the Versus Evil Autumn Sale

Welcome to the Versus Evil Autumn Sale