By MaevriSeptember 23, 2020Versus The Week

We’re back again with the Almighty Monthly Update from Run Wild. Read on to find out more about what the developer has been focused on this month.

We recently had a small closed beta to test a number of aspects of the game and to get some initial feedback from players who haven’t seen the game before. We had some great constructive feedback, some we were expecting and some we weren’t. We were really happy with the play test and would like to thank everyone that was involved. It gave us a number of areas to focus on, some being viable short term improvements, others that will require a bit more time to bring to fruition.

The way we tend to work is that we will first implement a feature to a minimal required level, to get it in game and working and test it and see how it feels, and then iterate on it from there until we get it to a stage where we are happy with it. Having player feedback during this process is great as it allows to see what players think is a priority.

For the last couple of weeks we have been in the process of adding a bit more depth to the combat system, in particular the melee aspects. The game is primarily a shooter, but players seem to be enjoying using melee so we felt we needed to bring forward some of our future plans for it. We have added extra attack animations for punch so that it now goes through a sequence of attacks rather than repeating the same one to add a bit more variety. 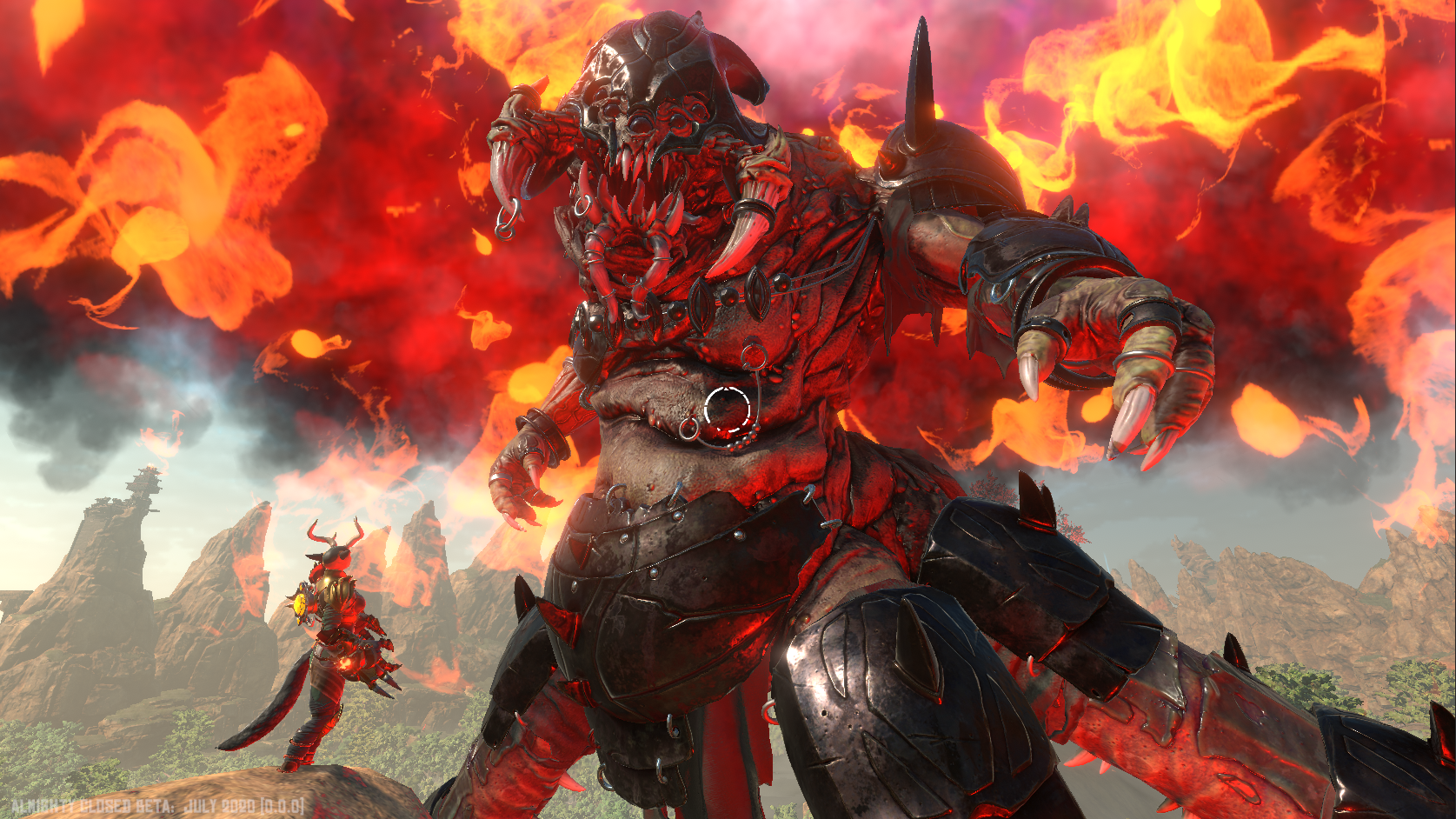 The damage applied is directly related to the power stone equipped to the Gauntlet, so for example if an Ice Powerstone is attached to a Gauntlet then the melee attack will do ice damage on impact.

For the next month we will be continuing with the combat improvements as well as starting work on the clan system. We are also taking into account some of the feedback we received from the closed beta and looking at improving the first time player experience and initial tutorials.

A while ago we updated the basic framework for the player emote system, from a crude bare bones implementation, to something much more user friendly and, we hope, fun. We have recently been fleshing it out with functional and more “entertaining” emote animations for players to use and abuse.  We now feel its time for a reintroduction to Almighty’s improved, if not entirely new, Emote system.

The emote system is accessed, in game, by pressing the emote button (Z on PC) which will bring up the emote wheel, from where the player can quickly choose from a variety of functional and non functional emotes. The wheel is split in to two sections with the blue buttons at the top used for the functional gameplay emotes, which every player has locked on their emote wheel. These allow for basic communication between players. They can allow you to request to join a pack, call out for healing, indicate targets or show general displeasure at you’re teammates playing style.

The lower black buttons are where the fun starts, representing as they do the player customisable emotes. The player can have six of these emotes ready for action at any one time. These range from sleeping, dancing and a variety of emotions and putdowns to fit you’re current mood.  Switching them out is just a case of selecting the emote you want to replace and holding the customise key. This will bring up access to the emotes you have collected and you can scroll through the pages till you find the one you want to add to you’re bar. Be warned though, the game wont pause while the menu is open so make sure you are in a safe place before you start to switch out you’re favourite dances!

If you feel less brave the emotes can also be set at the customisation vendor on you’re home island. Where again you can trawl through all the emotes you have unlocked to find that special one.

The system allows us to continually add more emotes which we plan do both as rewards and as future downloadable content.