That’s a wrap on First Class Paws 🐾🥂! We are so proud to say that our original charity goal of $7,000 was decimated within 48 hours of the event starting back on March 17th, 2022. We were able to launch our stretch goal plan and even expand that plan with the overwhelming outpour of support. The event completed on March 31st, 2022 with a grand total of $19,723.57 in donations towards the cause. The Versus Evil contribution of $2,500 was unlocked as part of our stretch goal, which is now included in the final total. 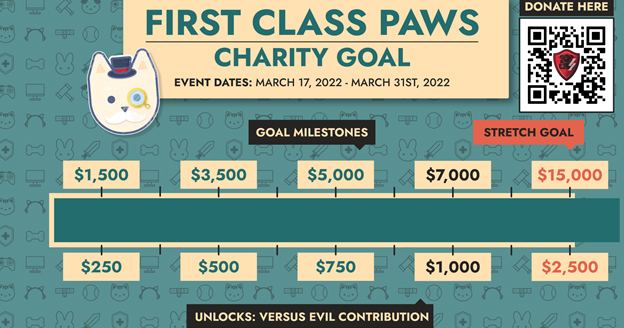 First Class Paws featured a combination of around 50 Versus Evil Heralds, Paws Your Game Ambassadors, and a few special guests, as they hosted charity streams towards our collective (original) charity goal of $7,000.

The content creators were part of collaborative First Class Trouble lobbies, and hosted lobbies and games with their own moderators and communities throughout the event.

The lobby hosts were also able to feature the brand new Custom First Class Trouble lobbies where players can adjust various telemetries of the match (like how many players are Personoids, how many syringes there are, how many mid-game maps there are and more).

Many of the participants had incentives for their communities to reward them for donating to the cause… some incentives being quite hilarious.

Check out this highlight video of the event ⬇️

“On behalf of the Paws Your Game staff and animal rescues across the country, I would like to say thank you for how unbelievably generous the Versus Evil Heralds and Paws Your Game Ambassador communities have been throughout the entire First Class Paws event. With these funds, Anderson Humane Society will be a little bit closer to launching its low-cost vet clinic for local families that need support. It has been unbelievable watching the video game community come together to help those without a voice. I can’t wait to see where this journey takes us.”

As part of Paws Your Game’s commitment to charity transparency, we wanted to share where all of the funds will go from this event. The focus of the event was to raise funds for Anderson Humane, who is working on building an accessible and affordable mobile vet clinic in South Elgin, IL.

Additionally, funds went towards Paws Your Game’s Foster to Adopt program, sponsoring an animal in need at This is the Dog Rescue and processing/organizing fees related to the campaign and donations. 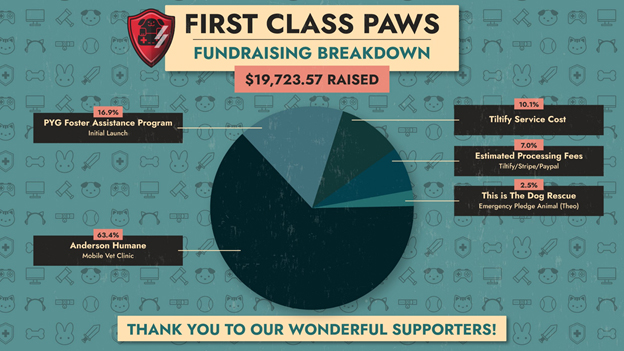 “Seeing so many gamers participate and get excited behind our mission was awe-inspiring! To watch this be our most successful fundraiser to date makes us so thankful for our PYG community and for the Versus Evil team and Heralds!! We appreciate you all more than we can express!!”

We are absolutely blown away by the support of our business partners, developers, in-house influencers, charity partners and our communities. Cheers to fighting for animal advocacy. We hope you’ll join us for our next charity activation. Thanks so much! 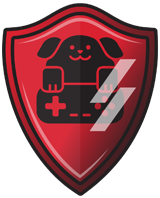 Paws Your Game fights for animal advocacy within the gaming space. They work to connect shelters, rescues and welfare programs to gaming spaces which brings necessary funding and awareness where it is needed most. By leveraging the social awareness and philanthropic nature of gaming, live streaming and influencer communities Paws Your Game is able to help shelters, rescues and animals in need.

Application for Versus Evil Herald Program

A First Class Easter is Coming

A First Class Easter is Coming