This weekend we announced Almighty: Kill Your Gods on the Guerrilla Collective live-stream. We’ve been so excited to see this finally happen and want to share more about the game and backstory. First, let’s start with the game.

Hunt demons, monsters, and gods solo or online with friends in this action RPG. You are an Alpha, a magical warrior infused with the power of your ancestors. Run, leap and fly across islands, ripping your foes to pieces, and rebuilding your shattered Home Island with their remains. Bring low the oppressive false gods, protect your kindred and become Almighty. Features:

+ Use magic gauntlets for devastating ranged or melee attacks, and amulets to summon powerful spells in this 3rd person Action RPG.

+ Craft and customize powerful gear to create your own unique character class and play styles.

+ Fight in reactive, changing environments. Anger the gods and see the islands change before your eyes.

We followed up shortly with a gameplay video featuring creative director at RunWild, Darran Thomas.

RunWild is a studio out in Wales, led by genius industry veterans. Darran himself got his start at Peter Molyneux’s groundbreaking first studio Bullfrog, which old heads will remember for the Populous series and Dungeon Keeper. Everything Darran waves his hand at transmutes into the physical manifestation of awesome. He’s helped build a world inspired by Welsh werewolf mythology and Hong Kong martial arts heroes. The result is a tale about a clan, the Kun Anun, who have been terrorized by under rule of the Elder Gods. But these gods are false ones. Your ancestors watch over you and give you the power to become an Alpha. You are tasked to save your clan, rebuild your land, and kill your oppressors.

We’ve been waiting to talk about Almighty since GDC, a lot of footage you see is pre-shutdown. Amid the craziness that is 2020, RunWild has been making the looter-shooter, action-adventure-platformer, RPG that you’ve been wanting. Almighty is a lot of fun. Bounding around shooting healing beams at your allies, meanwhile wildly spraying machine-gun fireballs, as your allies call upon meteor showers at killer giants is fun. Facing an onslaught of angry enemies as you carry the head of your dead enemy to a teleporter and then defend the extraction is a lot of fun. Customizing your werewolf ninja’s horns is a lot a lot (a lot) of fun. Customizing your Home Island, building defense towers, assigning Kindred to jobs – it’s all fun too. Running on all fours, hovering and raining showers of ice shards at your enemies, summoning black holes… We really can’t wait for you to all to try Almighty: Kill Your Gods later this year. 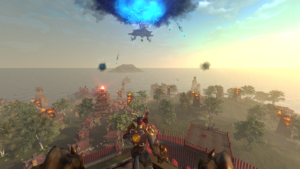 With the cancellation of GDC and the empty void left by E3 we, like the rest of the industry, were left wondering what to do. A Twitter thread led to a very real conversation. What happened next is something that’s never happened before. Without the insanity of running around GDC, without the spectacle and rigid format of E3, small game companies had the freedom to have a big voice. An industry made up of artists and small businesses looked to each other with a sense of kinship and lifted itself up. Guerrilla Collective is the result of video game companies coming together, supporting each other, and giving indie game teams a chance to show their creations to the world.

To wrap, we have a lot more to share about Almighty with you in the coming weeks. Please Wishlist the game now on Steam, follow our socials and sign up for newsletters and all that below to learn more about the game as we release new info. Thanks for reading, we’re going to go play some more.

Versus the Week of June 8

Versus the Week of June 8