We’re wrapping up a very eventful year for the studio as we gear down for the Christmas break. 2022 saw us secure a partnership with Versus Evil, grow our team, exhibit at gamescom and of course up the quality of the art in Broken Roads to levels we never imagined when we started off as a 2D, tile-based game back in 2019.

For this blog we chatted to each of our artists, our level designer and our producer to get a feel for some of their highlights from the back half of the year. 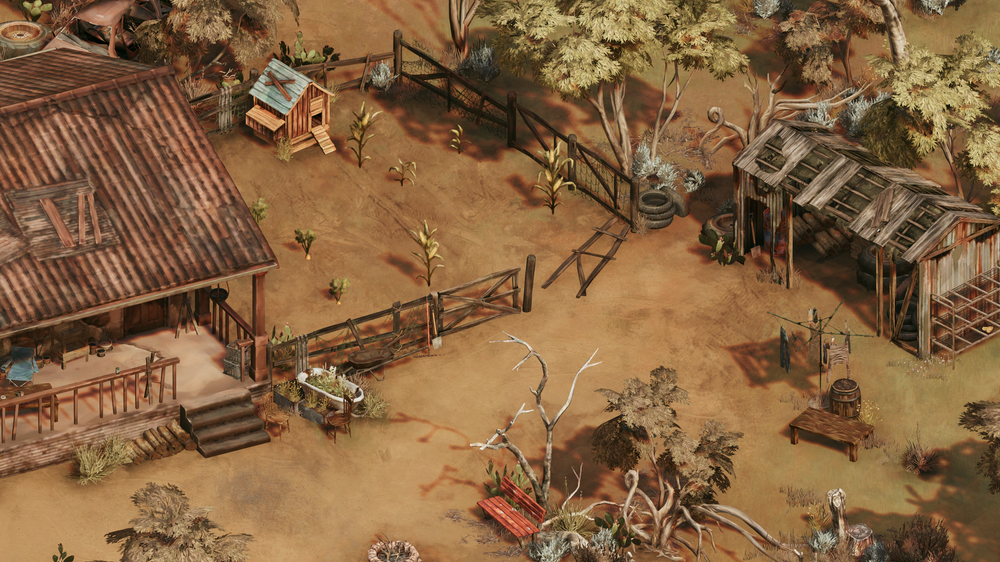 “Working on set dressing older scenes that have been in a partially unfinished state for as long as several years has been very satisfying, and it’s been very rewarding to see how far we’ve come over the life of the project in terms of quality and art fidelity. Being able to pack details into every corner and fill up open spaces with interesting bits and pieces has in my eyes really helped to bring the narrative we’ve heard about to life. I’m really excited for players to wander through these places and start to pick up on the stories of the people who live there, not only through the main narrative but through the little stories the environment itself tells.” 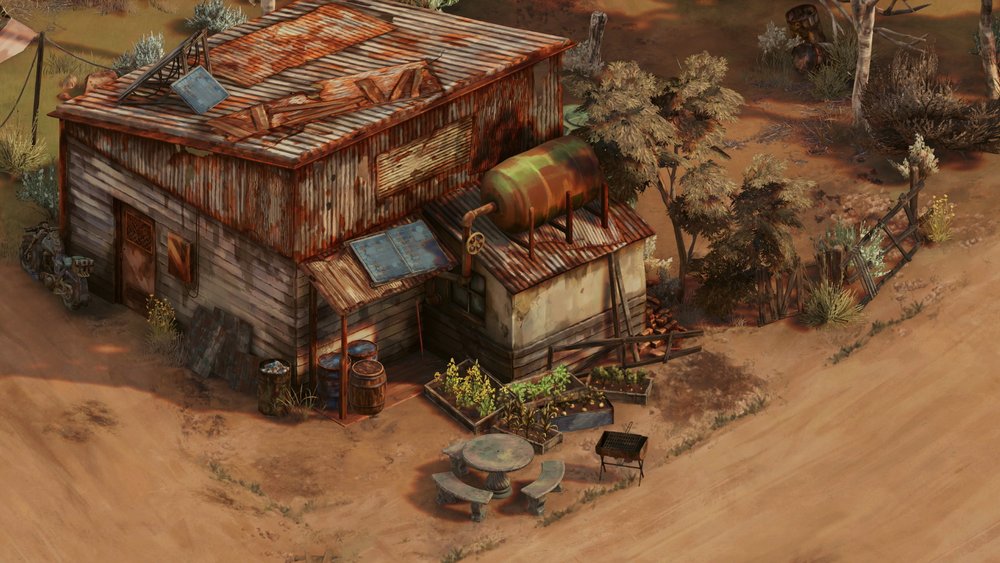 “It’s been really satisfying seeing how far we’ve come over the last 3 years, and I’m really proud of the point that we’ve gotten the game to now, through lots of ups and downs. I’m sure everyone on the project has had their own expectations of what they would like the end result of the game to look like, but it’s been really cool to see things reach the level of detail, style, and complexity I’d always hoped we’d be able to achieve (and to be and have been part of getting there!).”

“As the environment designer for this narrative-based game, I believe in storytelling through world building, so that the player feels immersed in the world and its stories. Because our game has a fixed camera angle, we can really leverage traditional rules of composition in order to lead the player’s eye toward areas of importance within the environment. Especially with the interior scenes that we have been working on recently – I try to design them in such a way that Ryan can leverage light sources to create focal points that can enhance mood and story. It’s incredibly rewarding seeing the whole team’s art come together in a scene!” 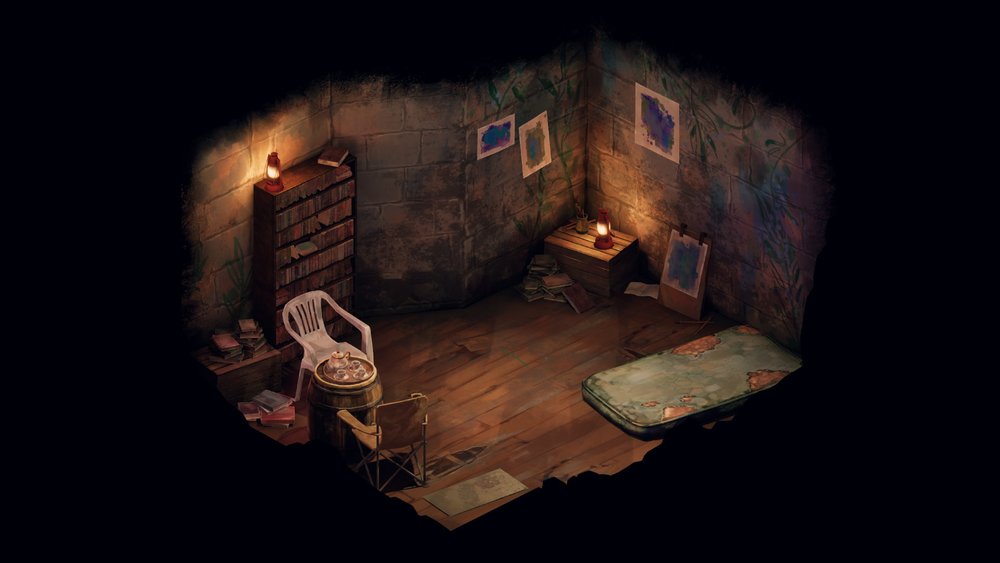 “I have really enjoyed researching Australia in my environment design process. I’ve looked at small town bake sales, underground homes, glow worm caves, Mars terraforming simulators – you name it. My internet history is all over the place. I think that’s my favourite part about our game, there are so many unique aspects to Western Australia, it’s cool to try convey them in a way that would make a local go, ‘Oh wow! That looks like my town after the apocalypse!’“ 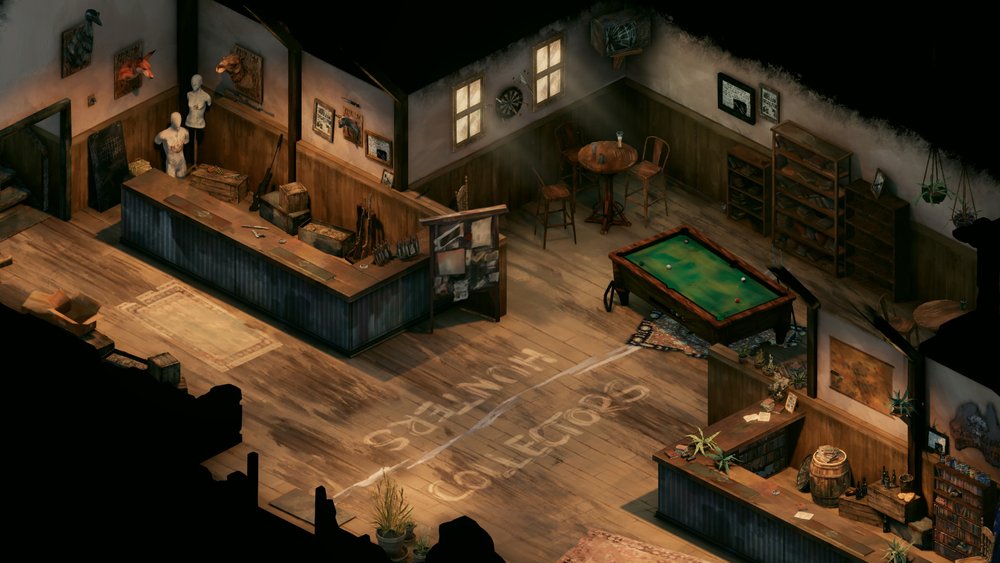 “A fun task to work on was concepting the strange sphere that appears as an object of interest in the Merredin Governor’s HQ environment’s display cabinet. It was a creative blue sky task that allowed me to be really free with exploring all kinds of intricate details and textures to make this sphere stand out and look special.” 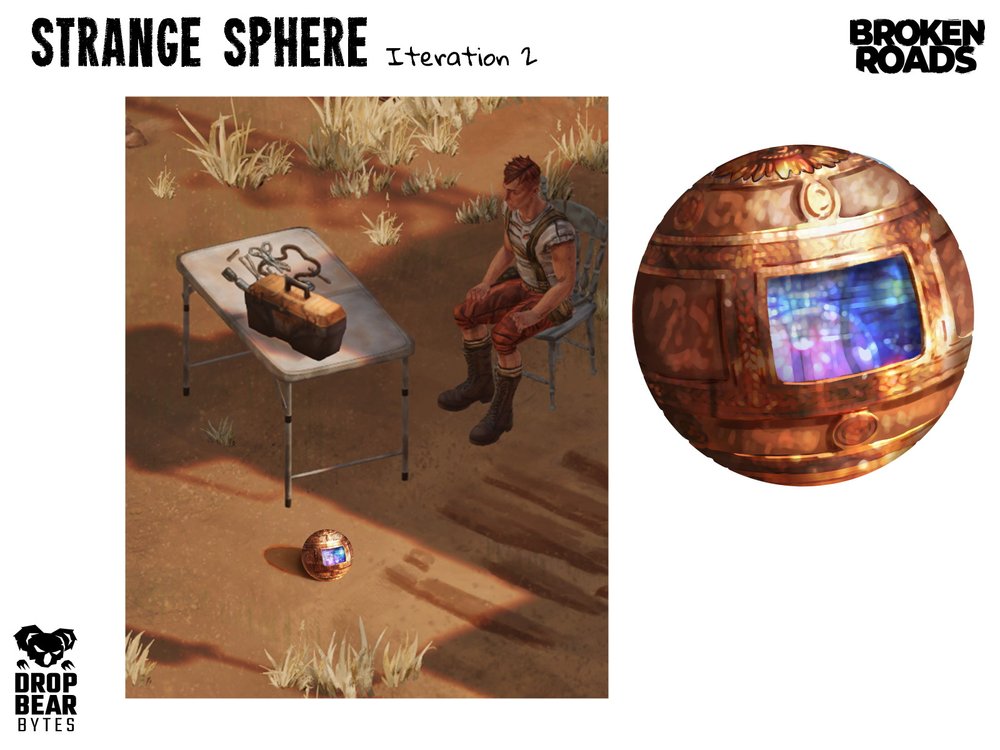 “When thinking about the object from the perspective of how it’s going to appear in game, it was important to dial things back a bit and make sure the details where readable from a far distance.”

“Seeing all the assets that have been created by the team assembled to generate the designed environments has been such a pleasure to bear witness to. I’ve enjoyed seeing the models I’ve helped create come to life. Having come from a film and television background, it has been quite interesting to see how the gaming industry works. The process is similar but different in its own right. I’ve enjoyed learning this new pipeline.” 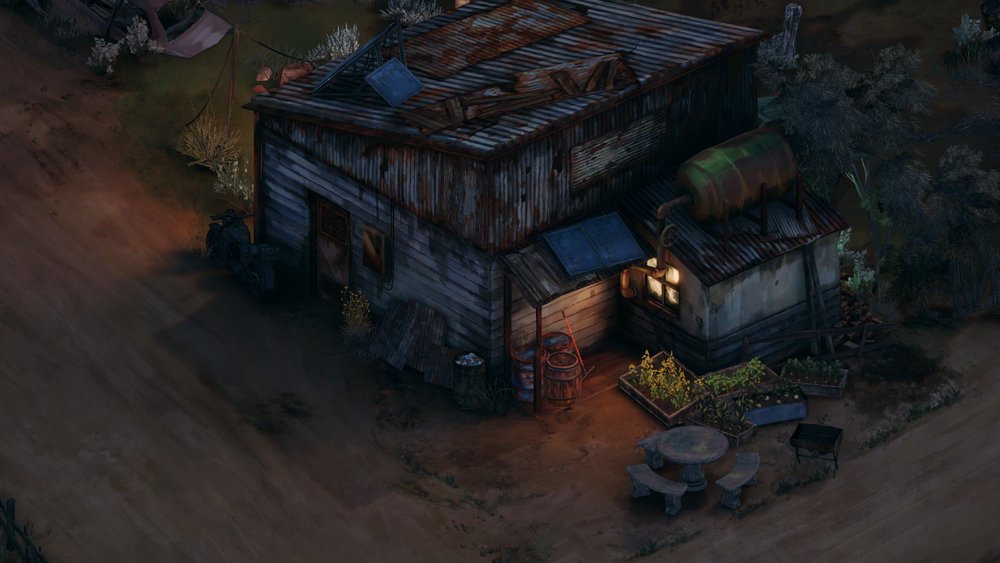 “I am currently modeling a macguffin that has challenged me to a satisfying degree and has made me fall deeper in love with this game. I try to make sure the base of my model is exceptionally done so that it makes the following steps much easier to go through, be it the sculpting faze or even the unwrapping stage. The most satisfying part of my job as I have indicated above, is seeing the final product come together. When all the different departments’ work comes all together to form the complete picture is my happy place.”

“I am incredibly proud of the milestones we have achieved in improving the overall quality of the game. We decided to make the move to full 3D in 2021, and have found that this has benefitted us greatly. 3D models allow for more accurate lighting and shadows and that is clearly evident in this scene of the Governor’s HQ.” 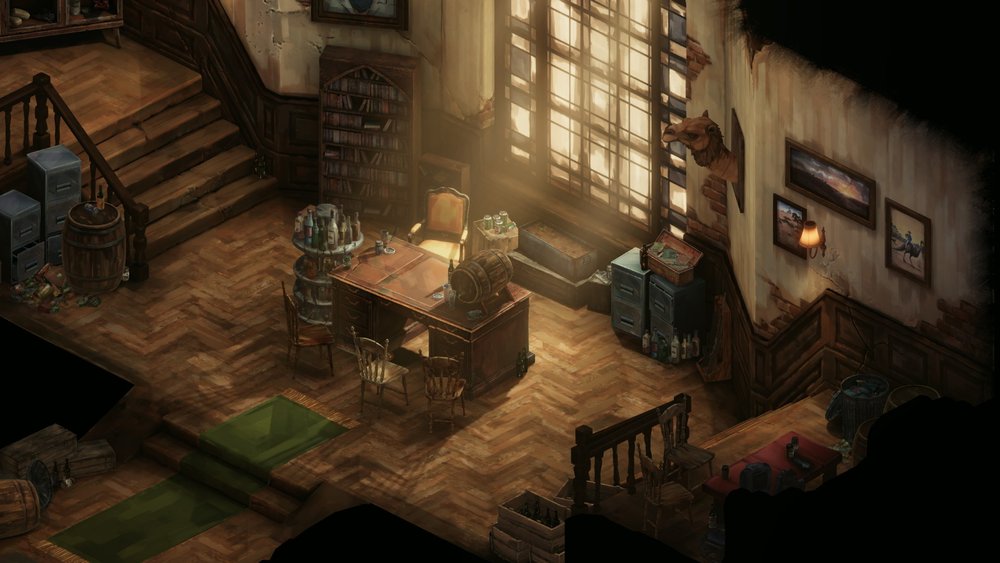 “We wanted this scene to feel of importance and adding the great big window behind a large classic desk achieves for a great focal point of a person of power. We are constantly chatting about ideas and how to make the scenes feel more lived in and believable. We like to imagine the characters in the game and how the overall scene would tell their story. Angela Smith is very dignified and has great pride showing off her collectables, whereas if Malcolm Hogan were to become Governor, you would see a great deal of hubris and indifference. This scene is evident of great team work and I am very honoured to be working with such talented artists.” 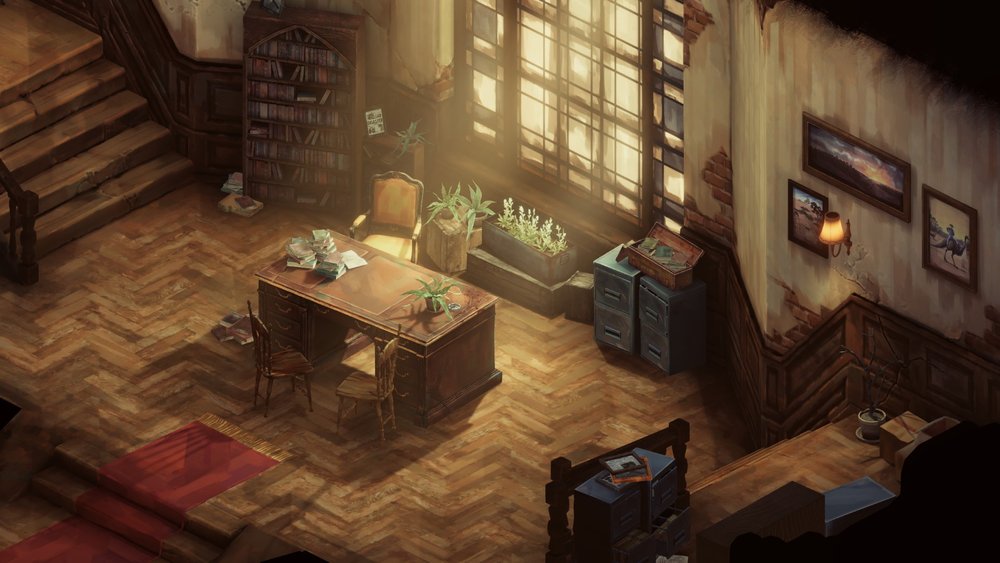 “Merredin is an interesting level to talk about as its come a long, long way. Myself and Jesse [Moore, Narrative Designer] have talked at length about where to move the buildings around to make them easier for the player to access, what placements of buildings and landmarks make sense and will be seen by the player, and where characters should be standing, sitting, and walking to.” 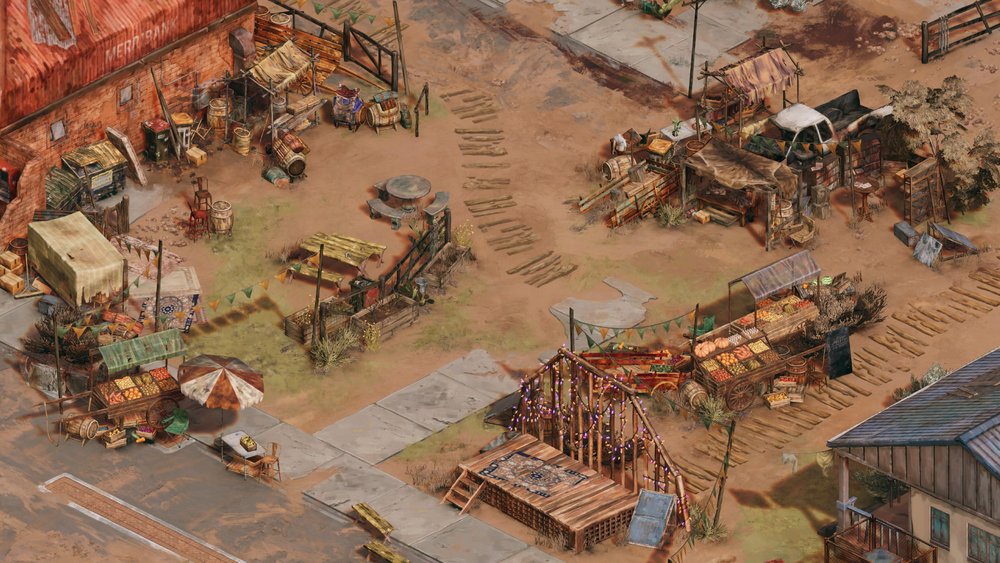 “The overall layout of the level has remained mostly the same, and while we’re still making changes, adding polish, and bringing it up to our new standard of quality, its identity has remained the same since its first version from over two years ago.” 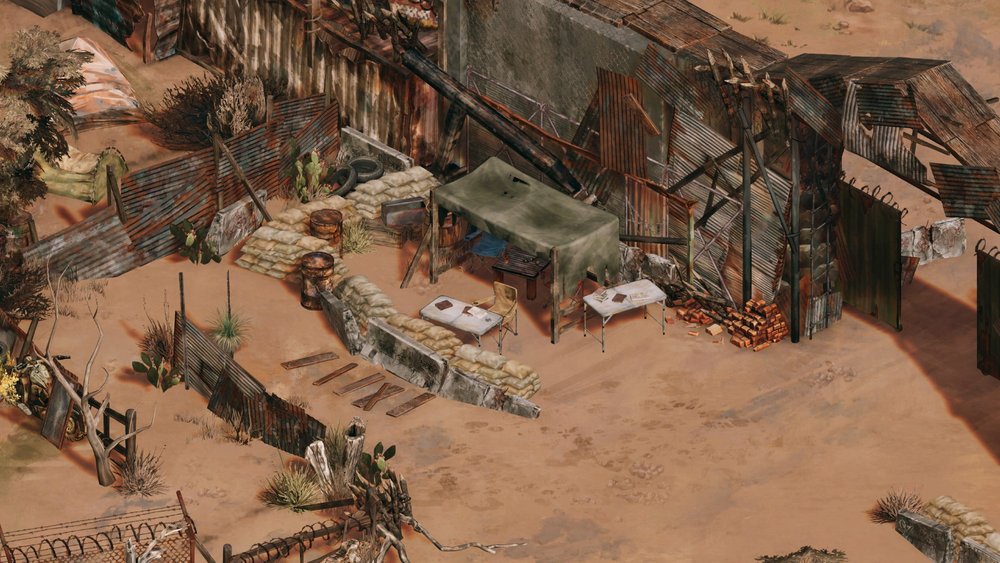 “It’s been a great pleasure Producing the Art Team. The quality of work has skyrocketed and the team has worked so hard to nail a high standard of Art quality across every map area and interior in the game. Everywhere from the roads you walk to the interiors to explore, we have put so much work into making everything that extra bit beautiful.”