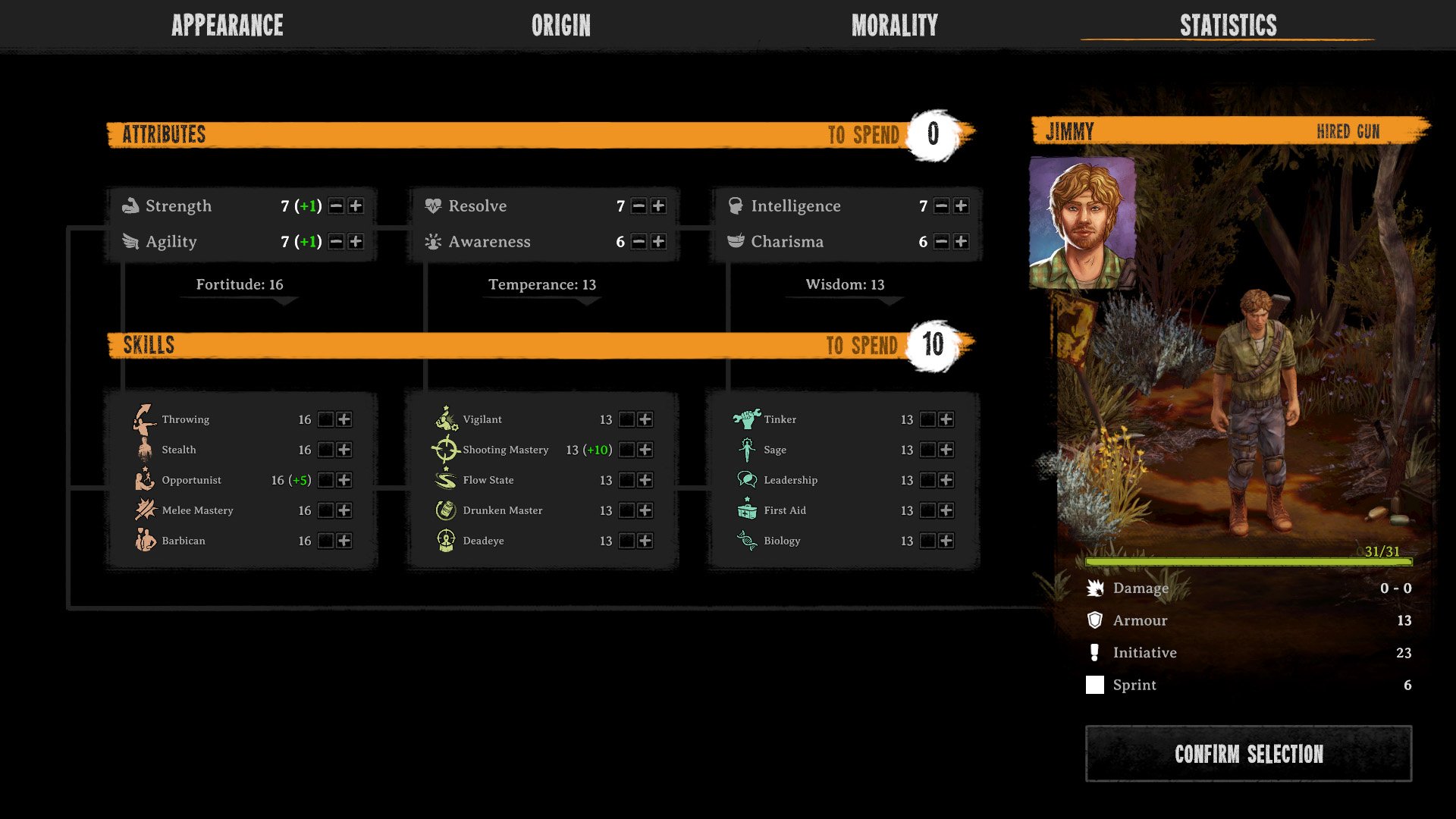 In this update we’re giving a rundown of the attributes in Broken Roads, the three categories of skills the attributes play into, as well as a brief look at some of the skills derived from them. Please note: we’re in the middle of reworking much of the UI, so the images shown here are not representative of the finished product.

Attributes are the core stats that determine a character’s build. As with many RPG systems we know and love, they determine hit points, movement points, a character’s ability to perform actions based on what attribute that action is associated with, and so on. In Broken Roads, attributes also determine the baseline integer for skills in each tree (or ‘category’, explained below).

We wanted each attribute to be significant both in and out of combat, with skills and abilities to suit the kind of build a player wants to have, or the playstyle they may be going for in any given run through the game. Want to build a charismatic but not too smart mercenary-type with a fixation on serving the greater good? We want that to be completely viable. Or a wily, self-interested merchant who can handle any type of gun with ease but is so weak they can’t fight themselves out of a wet paper bag? Also entirely viable.

Strength (STR)
Affects Action Points, melee and thrown weapon damage (for non-explosive projectiles), lifting heavy objects, bashing down doors, and pretty much anything that involves flexing a bit of muscle.

Agility (AGI)
One for the acrobats and athletes, this is the major determinant of Movement Points, increases accuracy of thrown weapons, and works alongside Strength to determine a character’s base score for Fortitude skills.

Resolve (RES)
This measures how well a character can withstand pain, their success in facing both physical and psychological adversity, and their ability to stay calm under pressure.

Awareness (AWR)
The stat that allows a character to notice things around them, for example improving aim and general use of guns, spotting a camouflaged creature or enemy, and knowing when someone’s lying. A character’s Awareness and Resolve scores are added together to determine a character’s base score for Temperance skills.

Intelligence (INT)
Simply put, how smart a character is and how well they apply themselves to support tasks such as first aid, tinkering/repairing things, and of course constructing convincing arguments in dialogue.

Charisma (CHR)
This stat determines how good a character is at talking their way in, through, and out of difficult situations. Charisma can also increase the success chance of numerous dialogue checks. Along with Intelligence, Charisma determines the starting value of a character’s base score for Wisdom skills.

Fortitude skills include Melee Mastery (bonus damage, accuracy, critical hit chance and Initiative while wielding a melee weapon), Barbican (shrug off damage like a brick shithouse) and Opportunist (help yourself to a free swipe at enemies doing a runner). 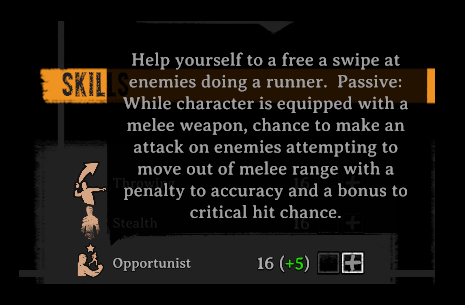 Wisdom skills include Tinker (use swanky devices, pick locks, add additional utility slots in combat), Biology (increases the amount healed by restorative items, and at higher levels grants a chance not to consume a restorative item on use), as well as Leadership (set an example for those around you, granting Initiative and other bonuses in combat, as well as unique dialogue options at certain moments throughout the game). 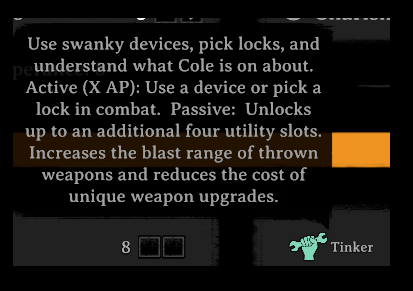 Temperance skills include Shooting Mastery(not only improving how handy you are with a gun, but grants various passive abilities as you increase the skill), Drunken Master (grants various bonuses obtained from consuming the different kinds of beverages on offer in the game) and Flow State (after two consecutive ranged attacks that hit their target, the character receives a bonus to accuracy on each attack until they miss). 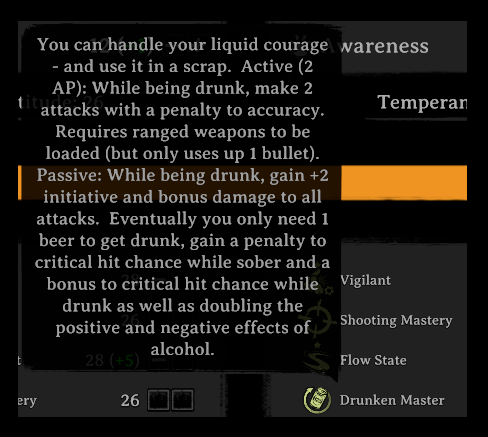 At the start of the game, you will have a total of 40 points to allocate across these 6 attributes – it’s a point-buy system, so no dice rolls during character creation. Then, each level up, characters gain 1 attribute point and 5 skill points. Just as at character creation, increasing attribute points during level up also increments each skill in the skill categories mentioned above.

There are five skills in each category, and each has a score calculated by the sum of the two attributes that make up the category. This score is the minimum a skill of that category can be – thus in this example below (base of 11 in Strength +1 as a Hired Gun bonus, and base of 12 in Agility +1 as a Hired Gun bonus), all of the player’s Fortitude skills would start from a baseline value of 25.

Note that the Opportunist and Shooting Mastery skills receive Hired Gun bonuses as well, granting +5 and +10 respectively during character creation: 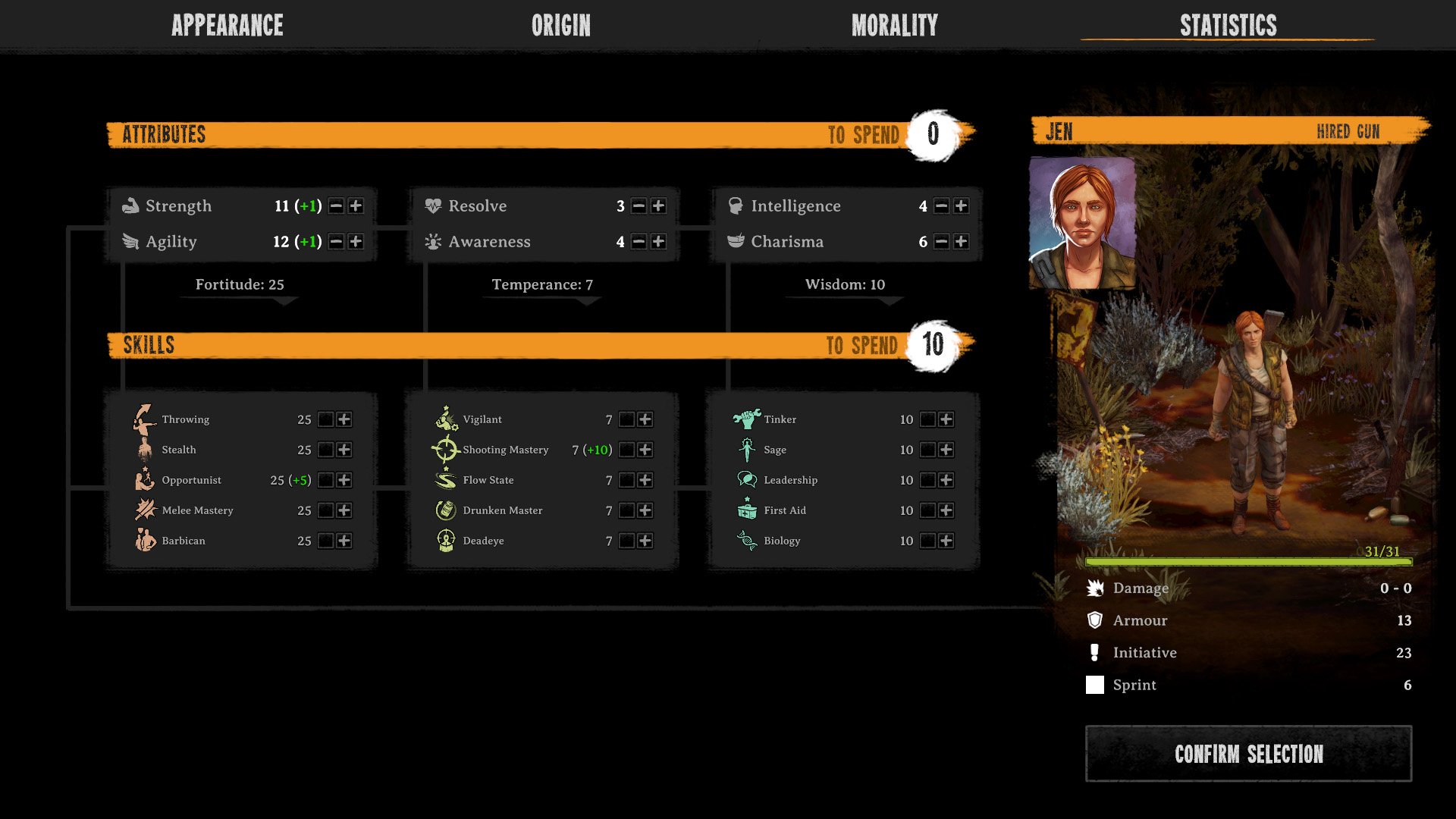 In January we’re going to do a blog focused on each skill, each derived stat, and the various active and passive abilities granted as your character progresses. We’ll share those details with you very soon, along with – hopefully! – our new UI designs and artwork.

Things can – and probably will – change all the way up to launch as we test and balance, so don’t be surprised if the actual values/numbers/skill names used in this blog aren’t the same when the game releases. 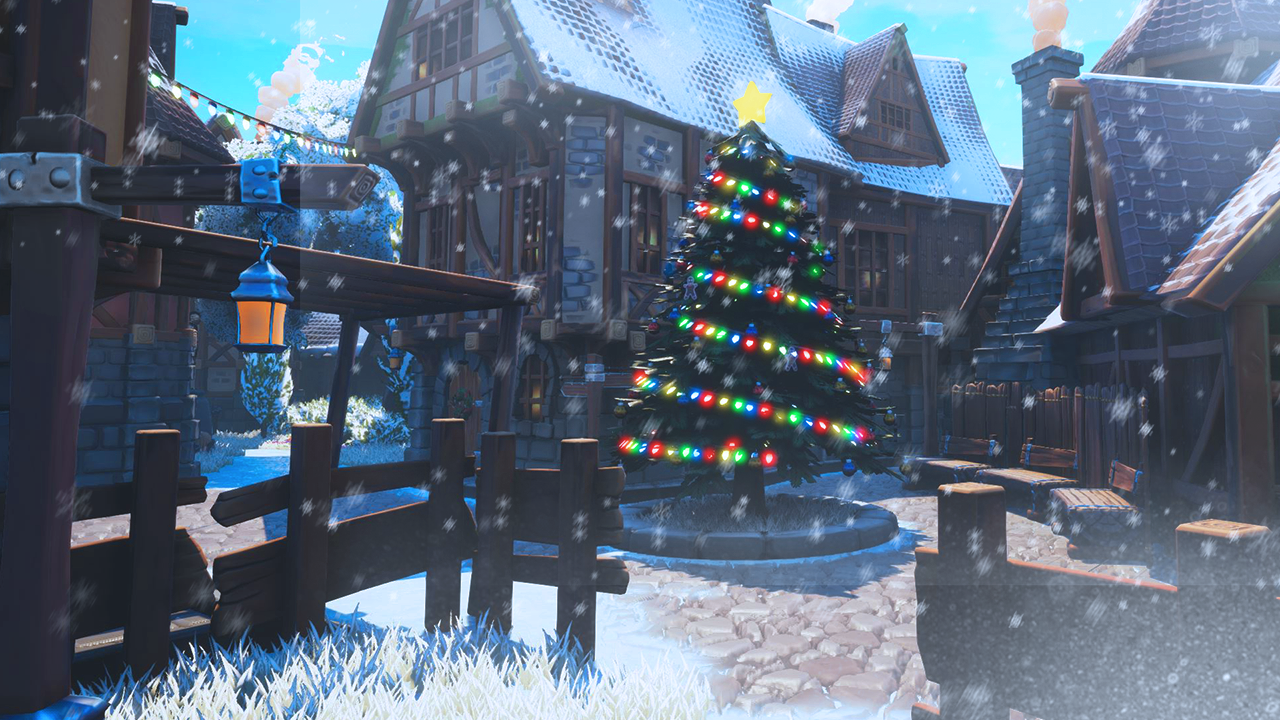