Sup, vatos! There we a lot of going-ons going ons for Versus Evil this week. Here’s a quick recap:

Deadfire is coming to PS4 and Xbox One on January 28, 2020 as a digital download for $59.99. Also, our homies at THQ Nordic are releasing a really sweet Collector’s edition for $129.99 along with the standard edition at $59.99. You can pre-order the Collector’s Edition here already. 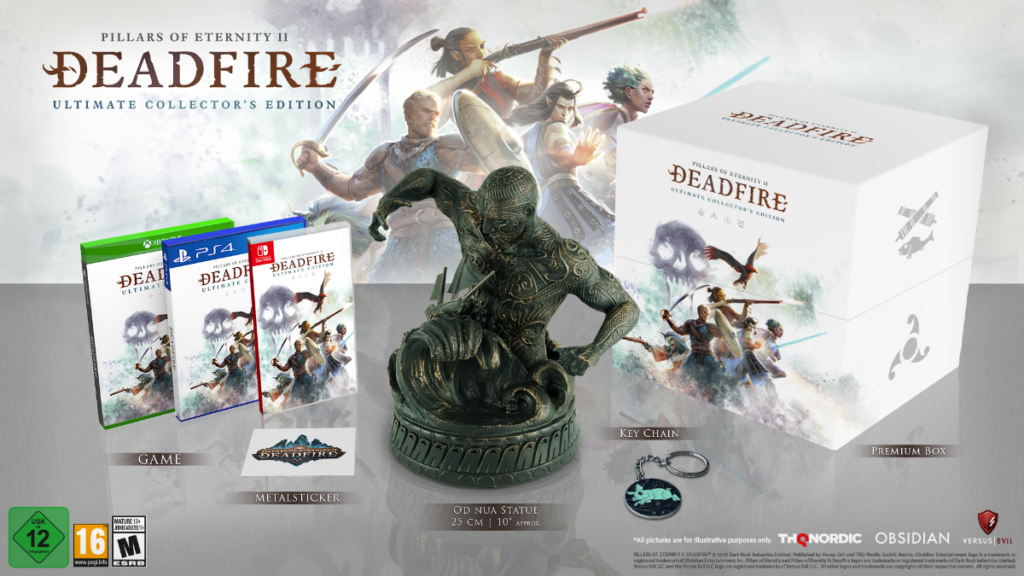 Do you see this thing? You see how ridiculously cool that statue look?

Some of you have been asking about the Switch version. We don’t have a release date for that yet, we’re taking a little more time with it, as we definitely want to ensure it’s the best experience possible on Switch.

PILLARS OF ETERNITY: COMPLETE EDITION ON SWITCH GETS ITS BIG PATCH

Patch 2.56.00 is live on Switch! It addresses some major issues including the Grey screen visual corruption of the game and related UI issues. We also addressed a number of general stability issues, general issues, and bugs related to specific skills and items. You can read all about it here.

Thanks again for your patience, everyone. We find ourselves grateful to get to work in video games every day and it hurts our hearts that some of you ran into these issues. Like most of the dev teams we represent, we’re indie too, and we’re always working our hardest for you. We don’t consider ourselves “personalities” and we’re not a big faceless corporation. The people you see at the PAX booth or at our events aren’t paid promotion people, that’s literally us, and we take everything you say to us to heart. We do encourage you to continue reporting issues that you see as that helps us tremendously. We’re listening and encourage you to make sure to join our Discord.

CARDPOCALYPSE COMES TO XBOX ONE, PS4, AND NINTENDO SWITCH DECEMBER 12.

Save 20% on your pre-purchase on Switch and Xbox One!

We’re thankful for the positive feedback everyone has given Cardpocalypse on Apple Arcade and PC so far. The team at Gambrinous really poured their heart and soul into the follow up to their Guild of Dungeoneering. If you haven’t checked it out, remember that first month of Apple Arcade is a free trial!

Not that we don’t always like the good folks at GamesRadar, but this article made our Friday! If you haven’t played Yaga, it’s out now on Apple Arcade, PC, Xbox One, Nintendo Switch, and PlayStation 4.

FAERIA IS NOW ON XBOX GAME PASS FOR PC

If you have Xbox Game Pass, you can play Faeria on your PC! Read more about it here! Or just jump on in and play! This isn’t the console version of Faeria….. just yet.

AT SUNDOWN: SHOTS IN THE DARK ON SALE ON XBOX ONE

As party of the Xbox Party Time Sale, At Sundown: Shots in the Dark is 50% off for a limited time. It’s the perfect party game to add to your library before your relatives come over.

Well, that’s all this week! Remember to stay up to date on all the latest news by joining our Discord, and follow us on Twitter and Facebook.